Home - About the Faculty of Informatics

About the Faculty of Informatics

The Faculty of Informatics was established in 2008 and has widen the scope of the structure of Pan-European University outside the social sciences. The faculty is the only of its kind, established at a private higher education institution. It offers university education at bachelor´s and master´s level. A professional doctorate title (RNDr.) may be achieved in special proceedings.

Expertise of the Faculty of Informatics follows the needs to educate highly qualified professionals in the field of information technologies and to equip each of its graduates with a set of knowledge and skills required by the professional IT sector. The flexibility of the contents of degree programs enables the faculty to react to the actual needs of the IT sector and the labour market in the respective field.

Corporate partnerships with national and transnational IT corporations, most notably IBM, Education First, Vis Gravis, Asseco, Gratex International, Goldmann Systems, serve the purpose to connect a general tuition with practical aspects of studies. Experts are being invited into the direct tuition and specialised lectures, seminars, workshops and other forms of practical professional tutorship constitute tangible results of cooperation with the corporate partners.

We are fully aware of the fact that without an innovative, practice oriented and interdisciplinary interconnected university education, equipped with the most up-to-date IT and communication technologies the raising of a new generation of professionals would be unthinkable. This is why we always pursue a modernisation of our premises and equip them with the highest standards of technologies and IT laboratories.

An integral part of the education is the creation of projects of virtual and enlarged reality, as well as gaming programming.

An interconnecting offer of parallel studies in the fields of expertise of other faculties of PEU, such as law, psychology, economics and media may be offered. 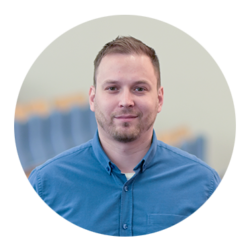 ,,The Faculty of Informatics gives a general insight into programming, big data, IT systems design, databases, 3D modelling and much more. Thanks to this a student can find the course which he is most interested in. Once he has spent his time studying the selected area, in fact he will choose the direction for his future IT career.”

Lecturer of the Faculty of Informatics, RNDr. Ján Lacko, PhD. 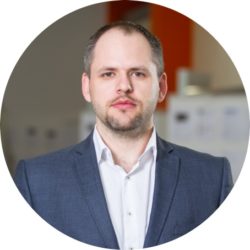 ,,As a pedagogue, I demand a lot from students, not only theoretical knowledge, but also practical skills, as they learn subjects related to computer graphics and virtual reality, it is important for students to take part in real-life projects thanks to our laboratories with modern devices for virtual and expanded reality. With my students, we try to give lectures and do exercises to create an informal atmosphere that, in my opinion, supports creative and critical thinking.”

It is primarily used to test web, mobile, and desktop applications in terms of their functionality, appearance and user friendliness. The lab can also be used to test hardware prototypes of devices, as well as to investigate the social behaviour of users. It consists of a test and evaluation room, which is connected by a one-sided, transparent mirror with two-way audio communication and video recording of users with the possibility of recording a record. The lab is equipped with modern computing technology, with the ability to use a variety of hardware configurations, including mobile devices with Android and iOS and touch-based All-In-One computers, as well as application testing using virtual and widespread reality.

It is primarily used to teach the configuration of active network elements – routers and switches at the level of similar Cisco network academies, with an emphasis on teaching IPv6 technologies. It contains more than a dozen facilities provided by industry partners – the Volkswagen Slovakia Foundation and Orange. In addition to the physical configuration of the devices, a substantial part of the activities is implemented in the freely available GNS3 simulator, along with the use of other open technologies, such as Oracle VirtualBox. In the near future, the planned expansion of learning about network virtualization technologies and software-defined networks (SDNs) is planned. In addition, the lab also covers IoT technologies with the ability to configure mesh networks based on 6LoWPAN and 6LoBTLE.

It is part of the virtual reality VR FIRST. The lab is equipped with modern tools Oculus rift, HTC VIVE and OSVR headsets including top-of-the-line workstations. The lab also uses technology to create a virtual reality application for Samsung gear VR mobile devices, including the 360 ° video recording camera Samsung Gear 360. For the needs of creating interactive applications, we also have sensors for tracking the movement of users in virtual reality. Laboratory Infrastructure is shared with the Usability Testing Lab, which also allows you to test user behaviour while using virtual reality.

The Lego Robot Laboratory is equipped with three Lego Mindstorms EV3 kits for the construction of Lego programmable robots, including a control unit, a set of sensors and control motors, and a personal computer with a licence RobotC (C language programming), four standard tables for the annual First Lego League (www.fll.sk) the annual robotic competition.

The laboratory is designed for research and teaching subjects in the field of applied process informatics, communication systems, process control, virtual and mixed reality, artificial intelligence and digital electronic control and sensor systems. Physical models of manufacturing and technological processes are located in laboratories. The core of the laboratory are computerized systems to model, simulate, visualize and optimize processes at all levels of management following all trends of the Industry 4.0 concepts.